It's been awhile since the last post, but there have been some exciting new developments for Seshet and Gallery Girl! The film has been accepted into several film festivals so far! Maybe it will be playing in a city near you!! Here's the schedule:


That's it so far. One last thing, as you may have noticed, the California International Animation Festival already happened this past weekend...and "Gallery Girl" won Best Student Animation at the event! Thanks again to George Baker and the Fireside Foundation for putting on this wonderful festival that showcased the diversity that animation has to offer. Here's winning the plaque: Seshet is Ready For Her Close-Up!

Somehow, yesterday, I finished "Gallery Girl." The movie is done. All animated, colored, edited, the sound is even there. I can't believe it, but this thesis that I've been working on for a year has become its own thing. Last night we screened it, and it was so bizarre to see this behemoth that took so long, play out in its 5 minute length like it's supposed. In those 5 minutes, with the audience reacting for the first time to images that I've watched too many times to count, all the work seemed to disappear. This beast of a workload is now a newborn baby running off into the world. It's been an unbelievable challenge, but all the sleepless nights and technical spasms paid off. I can safely say I made the movie I intended to make from the beginning. Sure I trimmed a few things (I'm pretty sure the original pitch could easily have been a mini-series), but it never once compromised what I was going for.

It was amazing seeing everyone's films all done, too. We actually did it! Every single one was so unique and showed off all of our strengths. I can't wait to see where everyone ends up! The animation industry better brace itself!

OK, so even though I just said it seemed that all that work disappeared once I saw the movie all done. Well, as much as I want to forget it, I have to admit there was still quite a bit of work every step of the way. One of the most challenging sequences in the film was the Oil Painting. I was dreading it the whole time because it's such an important moment in the story. The look was essential to sell the concept. Seshet was stepping into an oil painting, and it needed to LOOK like an oil painting! But I still wanted to retain my more cartoony style throughout the film. I think I found a happy medium. Here's how I finally figured out how to do it:

First I roughed out the animation in Toon Boom with the beloved Cintiq (which was a piece of hardware ESSENTIAL in this process. I'm so glad Lauren and I decided to split it!).

Then I did Clean-Up, again with the Cintiq and Toon Boom. My rough animation is always ROUGH, so this was a pretty tedious part.

"Gallery Girl" - Clean-Up from Andrew Marshel on Vimeo.
Then it's time for color, which is far easier with Toon Boom. I created Sehet's color palette, and then "paint bucketed" like crazy.

"Gallery Girl" - Color from Andrew Marshel on Vimeo.
Now for the key to the oil painted look. Emily showed me how to overlay textures over my animation in After FX. This technique works perfectly, because the texture remains still while the character moves over it. So Seshet moves over the still canvas. I took down the opacity of this image of a painting canvas texture: 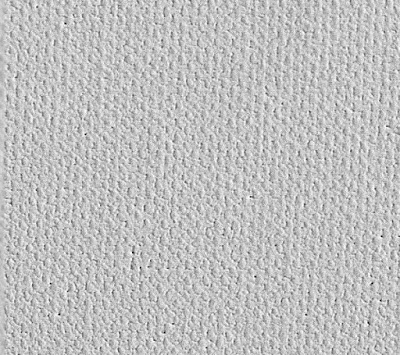 Then I imported it into After FX and linear-burned it onto my TIFF sequences of animation.

Then I composited the textured Seshet animation over backgrounds like this: 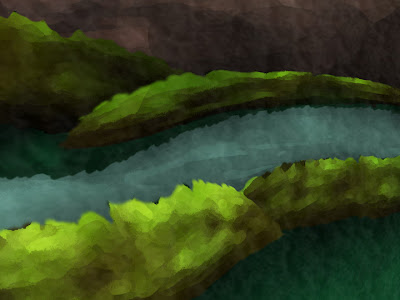 I painted these in Photoshop, slapped the "dry brush" filter on it, then overlaid the same canvas texture.

After all that, and with some sound FX, the shot is ready to go, and hopefully it looks like Seshet has found her way into an oil painting.

So there you have it. How I animated an oil painting...sort of.

Though the movie is done, "Gallery Girl" is far from over. I still wanted to submit it to film festivals and such. Hopefully it makes it into some. I'll definitely update this blog if it does. So keep checking back to see where Seshet ends up next!
Posted by Andrew Marshel at 2:51 AM 2 comments:

Hit Me With Your Best SHOT!

So it's actually happening. "Gallery Girl" will be done next Wednesday May 7 at 10 am! And I will most likely be working on it until 9:59 AM. But it shall be DONE! Truthfully, I'm right on track. Everything else in my film, including the end credits, is finished. Now all that I have left is the clean-up and coloring the entire Oil Painting Sequence. Yes it's still a lot, but I'm ready for it!

Like I said, the rest is final, so I thought I'd post a final screen shot to give you a hint of what to expect: 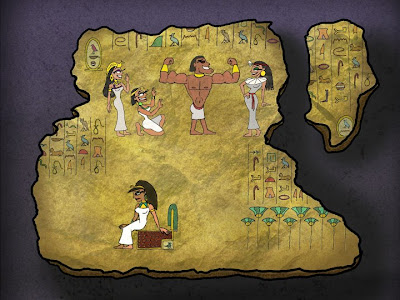 Wouldn't you be fed up if you were stuck on this rock with these air heads for thousands of years, too? What's poor Seshet to do? You'll find out soon!

So, a strange thing happened last Tuesday. I officially Picture Locked "Gallery Girl." That means all of my timing was set in stone, and now my Composer and Sound Designer can work their magic.

Speaking of magic, take a look at the wonders of the Cintiq. I'm creating the Oil Painting Sequence entirely with the Cintiq, and the first stage was the rough animation. So far so good! The Cintiq makes animating, clean-up and coloring so much easier it makes my head spin. Here's a rough shot created with the Cintiq. Seshet is stunned:

This last week I also revisited cleaning-up the Charcoal Sequence. I've got the charcoal process down to a pretty efficient pipeline (as efficient as animating with charcoal can get at least). Here's how it goes down.

First, I rough out the animation with a plain old pencil:

Second, I clean-up with that same old pencil (or probably many, many other pencils):

Third, I charcoal it up for the final look:

Then I hairspray and scan each drawing, adjust their curves in Photoshop, cut them together in Premiere, and, lastly, pass out.
Posted by Andrew Marshel at 12:29 AM 2 comments:

I started animating with charcoal a few weeks ago, and the results look promising. I'm using a charcoal pencil, so it's not nearly as messy as I thought it would be. Somehow I still manage to cover my arm with charcoal, but I kinda like that. I'm roughing out the animation with pencil and then going over it with charcoal for the final look. And then dousing it in Aqua Net Hairspray! These are the final looks for the scene in which Seshet is literally drawn into the charcoal sketch piece.

I've roughed out the other parts of Seshet's dance through the charcoal, but it comes at the end of the film and I wouldn't want to spoil the surprise.

In other exciting news, the Cintiq that Lauren and I are sharing is scheduled to arrive today!! I can't wait to try it out. I'll be animating the oil painting sequence with it, and it should make a whole world of difference in terms of efficiency. I may actually finish my movie now!
Posted by Andrew Marshel at 1:43 PM 1 comment: 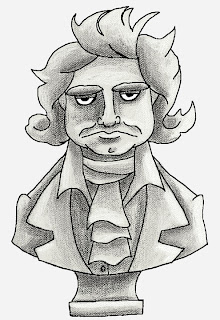 Speaking of composers...I'm looking for one. I'll keep you updated on what happens with that. I think it's about time for Seshet to painting-hop with a soundtrack.
Posted by Andrew Marshel at 12:00 PM 2 comments: 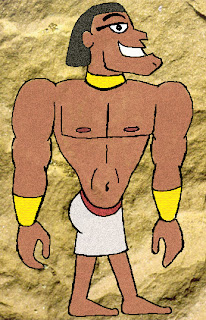 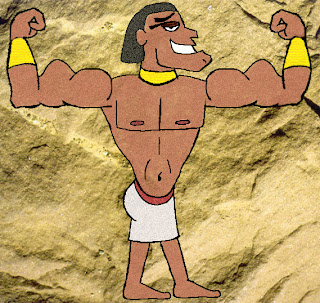 I've also cut the Warhol painting that Sesha/Seshet travels through, in favor of focusing on the other paintings. I'm in a constant process of streamlining as the deadline creeps up. So, talk amongst yourselves. I'll give a topic: Princess Sesh is neither a princess nor a sesh, discuss.
Posted by Andrew Marshel at 8:13 PM 4 comments: