So here is Sesh as her hieroglyphic self. She may be flat, two-dimensional and stiff, but she's still got her sass. I created the following in Photoshop, with each body part having it's own layer. I can then import all of the elements into After FX, parent them together and create a nifty hieroglyphic puppet. That's the plan anyway. I also made her slightly transparent so that the ancient wall can be seen through her a bit as she moves on it. I hope it's selling the idea. 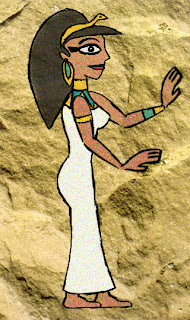 Sesh is soooo over this blog and just wants to go home and get some turkey! 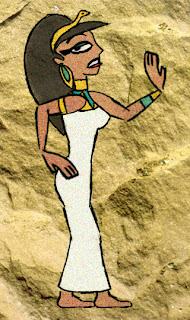 I think these are your best drawings of her yet. Great work!

Here's what I think Sesh is thinking:

"IS THE EARTH FLAT? I DON'T KNOW - I GOT CHILDREN TO RAISE."

It would also be really cool if you added hieroglyphic writing throughout the background of the painting. Or maybe superimposed it on the rock so it looks as though it were cut out from it. As Sesh and the other characters move, the writing can be a part of the texture that can be seen through them.