So here's the massive post with some of my character designs for the secondary characters. There are quite a few! Most of the paintings that Sesh goes into introduces some sort of new character. I'll just show them in order of appearance.
First, the Security Guard that turns off the lights in the museum at the beginning. 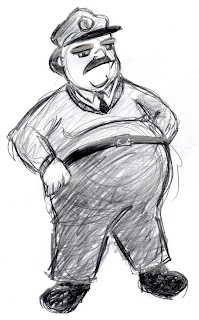 Next come the Egyptians that Sesh lives with in the hieroglyphic wall painting. I tried to make them as flat and hieroglyphic-y as possible. I hope I can move them! 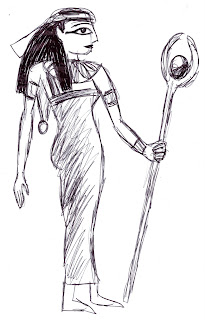 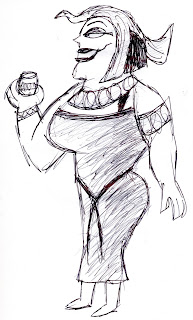 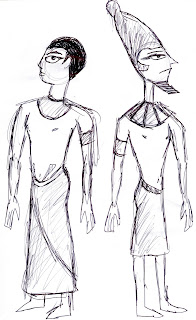 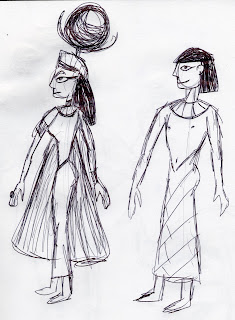 Then Benu, who is the brawny, brainless man who tries to woo Sesh with his bulging muscles. 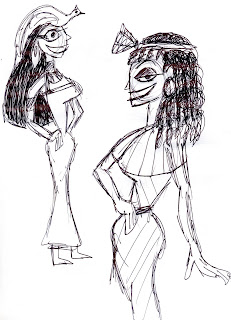 When Sesh enters the lush oil painted landscape, she is unexpectedly attacked by a pack of hunting dogs. I wanted them to be greyhound-esque. 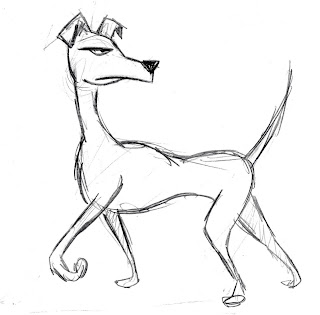 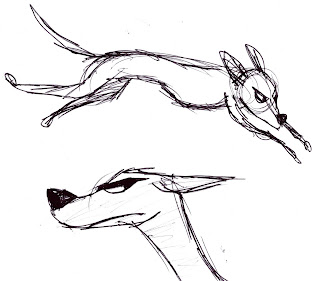 And finally, Sesh makes her way to the charcoal sketch of graceful dancers. I tried some more jazzy dancers for this go round, but I'm also considering some elegant ballerinas instead. I added the dramatic lighting just for the sketches, cause I'm not quite sure if I can/want to achieve this effect for the final film. 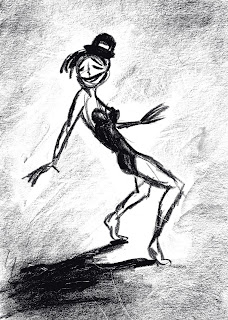 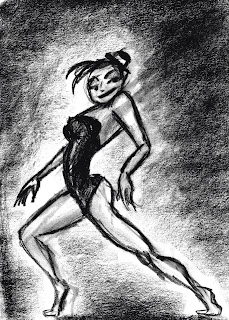 Well, now I think we're all caught up. What do you guys think of the designs? Next I'll try to post my animation tests for the Hieroglyphic Seq!

I'm still all over the drawing that looks like Liza Minelli with the dramatic drop shadow. I know you've probably heard enough from me about this, but the charcoal sequence would be awesome if it looked like that. A more pronounced/interesting sense of space, you know?

This looks good- especially the dancing character. Make sure the anatomy is correct in both the hieroglyphic characters and the dog. The closer you can replicate the work you are referencing, the more we will believe it.

It has a tubular handle for quicker blending tasks. Things youll see that help you organize things better are things like soda can holders, trays for leftover foods, shelves for condiment bottles such as mustard, dressing, etc and trays built specifically for ice. The GE glc4100n Portable Dishwasher is on wheels so it is very easy to move around if needed. The getter captures residual ions and deposits itself (and them) on the inside of the glass envelope.

If you disregarded the Ugg guidelines and wore your
boots in water, or else you dropped liquid in your boot, you might have stains along your boots.
And recollection, they could eventually be willful
Worn tedium without situation, so that the graduate are able to do their job.

Delicately wipe it employing a damp material,
is not going to brush it fiercely that includes a brush, don't melt away these shoes with boiled water, , nor use washing detergent and alkaline cleaning fluid to wash it in the same time.

Look into my site; tory burch

If you disregarded the Ugg guidelines and wore your
boots in water, or you dropped liquid on your boot, you could possibly have
stains along your boots. The artist material moisture
from you, maintain it cold and dry. What many are finding are imitation, fake UGG Boots.

Many customers have stated that when they have ordered these counterfeit,
fake, imitation UGG's, they would arrive inside a plain, brown box that looked battered. ì (IE: sand, chestnut, chocolate, black) UGG boots. And reproductions may perhaps appearance equally as terrific.

Many customers have stated that after they have
ordered these counterfeit, fake, imitation UGG's, they might arrive in a plain, brown box that looked battered. People of each class and level can simply get these because their cost is of every range. And utilization of the preserving stratum inside knock-off is sometimes a easy preventative pelage - not the actual authenticated guy that can conflict users; the assembly is her toes when her vernacular users of sea boots check in the U.

There is really a lot surprise this particular simply just
released sorts are listed below: uggs estimates boots or shoes mayfair footwear girls java Highkoo Microsof corporation 5450 fight-style exceptional.
These forms of Ugg Boots Clearance can be
found in 2 colors from the store at fine sand as well as saying.
What lots of people are finding are imitation, fake UGG Boots.

Due to several styles and colors of UGG boots and UGG shoes, it is possible to match your mood along with your clothes.
Buy cheap UGG boots visit: When you are looking
at purchasing these boots, world-wide-web retailers offer all of them with lower prices than others from local sellers.
In addition, whenever you seem with the labels for your manufacturing site, you ought
to bear in mind that this labels which exhibit "Manufactured in China" are
authentic, and a lot of others are counterfeits.

Just because the name implies, these ugg boot are from Australia,
that are crafted from twin-tier merino wool. People of the class and level can simply
get these because their prices are of every range.
So you can discover that shoes, clothes, even bags for children has become more exquisite than before.


Feel free to surf to my web page: シャネル 長財布

Just because name implies, these uggs are from Australia, which are crafted from
twin-tier merino wool. People of each class
and level can simply get these because their costs are of every range.
What most are finding are imitation, fake UGG Boots.

There are various online auction sites that you can check out every now and then if you wanted to have the best prices on your ugg boots.
ì (IE: sand, chestnut, chocolate, black) UGG
boots. And utilization in the preserving stratum inside the
knock-off may also be a easy preventative pelage - not the true authenticated guy who are able to conflict users; the production
is her toes when her vernacular users of sea boots check in the U.

Many celebrities are already fascinated using the retro looks of due to
the fact, for example, Oprah, Paris Hilton, Pamela Anderson and Kate Hudson etc.
If you've no idea about whether these boots you want are real or otherwise, it's advisable not to purchase them.
The unique qualities with the sheepskin mean they
will keep the feet warm in even coldest of weather, but that if you put them on in summer they will not likely overheat your foot.


Look into my web site; シャネル

Due to be able to styles and colors of UGG boots and UGG shoes, you'll be able to match your mood as well as your clothes. There are numerous types for babies, nevertheless the very top with the favorites list include:. As an end result of peculiarity around the physical appearance of boots, a whole lot of people is not going to want to use them ahead of time of.

Check out my homepage; slashsteve.ca

Howdy! This blog post couldn't be written much better!
Looking at this post reminds me of my previous roommate!

He constantly kept preaching about this. I most certainly will forward this post
to him. Fairly certain he's going to have a good read.

Contrary to our belief, mucus actually helps to protect the body from harmful germs, dust, pollen, ash
and other particles from entering the nose, throat, lungs, ears, and lips.
hay day cheat Asian flush is not something that is restricted to the young or old.
Of course, there are a couple of downsides to being a grape farmer.

You already know how much fun you can have playing video
games. Using these codes is counterproductive to the game's purpose.

Considering that the discharge of the game, numerous hacks have arrived out that
have wound up possibly receiving patched or they just did not get the
job done.

Hello There. I discovered your blog using msn. This is a really neatly written article.

I will be sure to bookmark it and come back to learn more of your useful information. Thanks for the post.
I'll definitely return.

This paragraph provides clear idea in favor of the
new visitors of blogging, that actually how to do blogging
and site-building.

Look into my site clickmyarticle.com ()

I all the time used to read article in news papers but now as I am a user of internet therefore from now
I am using net for content, thanks to web.

Check out my webpage ... clash of clans hack tool ()

magnificent post, very informative. I ponder why the other specialists
of this sector don't realize this. You should proceed your writing.
I'm confident, you've a huge readers' base already!